Tom Cleverley an injury doubt for Manchester United and England 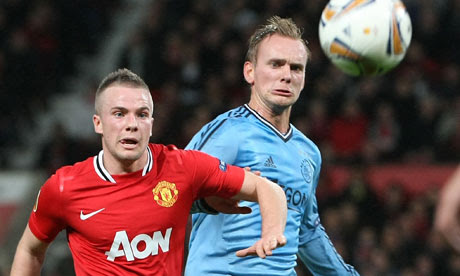 Tom Cleverley of Manchester United, left, contests a challenge with Siem de Jong of Ajax during the second leg of their Champions League tie at Old Trafford. Photograph: Matthew Peters/Man Utd via Getty Images
Tom Cleverley could miss Manchester United's visit to Norwich City on Sunday and England's friendly with Holland on Wednesday. The midfielder was sent for a scan on the knock he picked up in the 2-1 Europa League defeat by Ajax at Old Trafford on Thursday, although his manager, Sir Alex Ferguson, said he does not think it is serious.
Cleverley, 22, was replaced by Paul Scholes after an hour against Ajax and he will be assessed by United's medical department before any further update is offered, with Ferguson telling MUTV: "He got a knock. We sent him for a scan but we don't think it's serious." Cleverley returned after nearly four months out due to a foot injury only last week, in the last-32 first leg at Ajax.
Ferguson reminded his players of the quality of Paul Lambert's Norwich side, who might have taken at least a point in the reverse fixture in October and who already appear safe from relegation.
United eventually won that match 2-0 but Ferguson said: "They did well at Old Trafford. They missed a great chance to equalise. It wasn't until late in the match we killed the game.
"I think Norwich have probably exceeded everyone's expectations. The teams who have been promoted, particularly Swansea and Norwich, have excelled. They didn't buy a lot of players. They have stuck to their normal way of doing things. Norwich bought one or two from lower divisions but Swansea stuck with virtually the same squad. They have done very, very well.
"QPR started very well, then hit a bad spell but with Mark Hughes coming in and buying a couple of players you'd expect them to do better now."
Norwich stand eighth and are 14 points from the relegation zone and Ferguson is sure they will stay up. He said: "It is not easy coming out of the Championship but Norwich have done very well. Looking at the bottom of the league, I think there are five teams from 21 down to 19 points. There is not a great deal of leeway there. So from 21 to Norwich's current total of 35 is a big jump, so I think they are OK. They look as if they are enjoying themselves. There is a good atmosphere at Carrow Road with a full house every game. It is fantastic.
"I knew Paul Lambert as a kid at St Mirren. He played under my brother Martin when he was a coach there. He had a good career himself. He won a European Cup medal with Dortmund, then goes to Celtic. He has picked up the experience of being at Wycombe for a while. For a young manager Norwich is a good club to go to where the expectation is not too high. You have a full house and a lot of enthusiasm. It has suited him well."
发帖者 arron 时间： 17:34 没有评论:

Manchester United advanced to the next round of the Europa League today despite losing its first ever home game in the competition 2-1 to Ajax.
Javier Hernandez stretched United's 2-0 first-leg advantage in the sixth minute before Aras Ozbiliz made it 1-1 on the night 31 minutes later. Toby Alderweireld scored with three minutes left but Ajax could do no more than scare United, which is in the second-tier tournament after it was eliminated from the Champions League group stage. 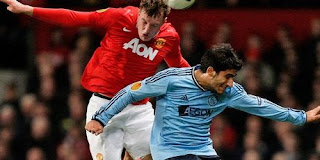 The English powerhouse progressed 3-2 on aggregate.
United will face Atletic Bilbao in the round of 16 after the Spanish side beat Lokomotiv Moscow 1-0 to advance on away goals.
Valencia and Atletico Madrid also progressed, as did PSV Eindhoven and Udinese.
United started strongly at Old Trafford and Hernandez scored following good approach work from Park Ji-sung and Dimitar Berbatov. Ozbiliz hit a 20-meter (yard) shot past goalkeeper David de Gea for 1-1 and, after De Gea made a point-blank stop from Christian Eriksen's header, Alderweireld bundled the ball into the net from close range.
One more goal would have take the Dutch side through to the round of 16 on away goals but United held out.
Manager Alex Ferguson blamed United's problems on his selection of a defense composed of Phil Jones, Chris Smalling and the Da Silva twins. None are vastly experienced.
"Tonight I used too many young players in the back four positions,'' Ferguson said. "It was a big risk we took.''
Trailing 2-1 from the first leg, Bilbao was reduced to 10 men when Fernando Amorebieta was sent off in the 60th for a second booking. But two minutes later, Fernando Llorente flicked a corner kick toward the far post where Iker Munian hit an unstoppable volley into the roof of goal.
Valencia beat Stoke 1-0 for the second time in eight days to advance 2-0 on aggregate. Pablo Hernandez lost his marker and cut along the goal line before slipping a pass to Jonas in the box, where the Brazilian forward tapped into an unguarded net for a 24th-minute winner.
Diego scored in the 48th to wrap up a comfortable 4-1 aggregate win for Atletico Madrid over Lazio, heading in unmarked from a corner kick.
Atletico coach Diego Simeone remains unbeaten in nine games since taking charge of the Spanish club at the start of the year, while Lazio has lost three straight to further pressure manager Edy Reja.
Udinese continued Italy's interest in style with a 3-0 win at PAOK Thessaloniki that ended the Greek side's 11-match unbeaten run in Europe and clinched progress by the same score.
Danilo headed in a corner from Giovanni Pasquale in the sixth minute and Floro Flores fired a free kick past goalkeeper Dario Kresic nine minutes later. Udinese captain Maurizio Domizzi made it 3-0 with a penalty in the 51st after Stelios Malezas had pulled Flores to the ground.
"My players did a terrific job,'' Udinese coach Francesco Guidolin said. "They showed a lot of character and exceeded my expectations. I couldn't have played in this stadium, under this pressure.''
Hannover won 1-0 at FC Brugge to advance 3-1, PSV eased past Trabzonspor 4-1 and 6-2 on aggregate, FC Twente advanced 2-0 after a 1-0 win over Steaua Bucharest, and AZ Alkmaar went through 2-0 after a 1-0 win at Anderlecht.
Sporting Lisbon beat Legia Warsaw 1-0 to advance 3-2 on aggregate, while fellow Portuguese club Braga was eliminated 2-1 with a 1-0 defeat at Besiktas.
Metalist Kharkiv, Standard Liege and Olympiakos also advanced. Manchester City progressed Wednesday with a 4-0 win over defending champion FC Porto.
发帖者 arron 时间： 17:24 没有评论:

Sir Alex Ferguson believes Ryan Giggs's astonishing career even eclipses that of legendary Italian Paolo Maldini as the former Welsh international prepares to make his 900th appearance for the club.

The veteran midfielder will reach the milestone if he plays some part in tonight's Europa League last-32 encounter with Ajax at Old Trafford.
Few come close to being such a star performer, at such a high level, for such a long time – the immediate comparison is with Maldini.
His first-team career with AC Milan spanned 24 years and he also made 900 appearances; 902 to be exact, before he quit, in 2009, a month before his 41st birthday.
Yet even there Ferguson feels there is a subtle difference that has to be taken into account when analysing the respective merits of two brilliant players.
"Obviously Maldini was a magnificent player but there is a distinction," said the United manager. "Maldini was a defender and although in his case, he probably put in a lot of running as a fullback, wide players have more work to do.
发帖者 arron 时间： 03:07 没有评论: